Escazú - Aarhus in the Andes

On March 4, 2018 after two years of preparation and three years of negotiations, 24 countries adopted the Escazú Convention, the region’s first ever legally binding treaty on environmental rights. With the instruments of ratification of Mexico and Argentina deposited before the UN on January 22, 2021, the minimum number of States Parties was achieved, meaning that the Convention will enter into force on April 22, 2021. The new instrument picks the trail of the landmark Aarhus Convention of UNECE.

Also known as the Regional Agreement on Access to Information, Public Participation and Justice in Environmental Matters, under the auspices of Economic Commission for Latin America and the Caribbean (ECLAC), the new international policy instrument is designed to protect environmental defenders and to make it easier for nearly 500 million people to get information, participate in the decision-making processes that will affect their lives and hold powerful interests to account.

Called “a historic step forward for environmental rights in Latin America and the Caribbean” by the World Resources Institute, the Escazú Convention was guided and inspired by the landmark Aarhus Convention applied to the same purposes since 2001 by the UN’s Economic Commission for Europe (UNECE).

Response to the violence against environmental defenders The Escazú Convention comes to address the challenge, posed by increasing violence against environmental defenders, WRI explains. In 2019, Global Witness reported that over two-thirds of killings took place in Latin America, which has consistently ranked the worst-affected region since Global Witness began to publish data in 2012. In 2019, the Amazon region alone saw 33 deaths. Almost 90% of the killings in Brazil were in the Amazon. In Honduras, killings rose from four in 2018 to 14 last year, making it the most dangerous country per capita in 2019. In the Caribbean, threats against activists are also intensifying.

In response, the Escazú Convention requires governments to adopt a new set of standards to safeguard environmental rights and realize Principle 10 of the Rio Declaration. Some of its strongest legally binding provisions focus on:

• Protecting environmental defenders. The Convention is the first international agreement that specifically uses the term environmental human rights defenders, guaranteeing the protection of their rights. It requires governments to take measures to prevent, investigate and punish threats and attacks against these community leaders.

• Reducing barriers that undermine vulnerable communities’ ability to exercise their environmental rights. For the first time in international law, the Convention requires governments to ensure that vulnerable populations, like Indigenous Peoples or poor communities, can exercise their full rights to information, participation and justice. Actions governments must take range from providing free legal assistance to creating more accessible communication channels between affected communities and political officials.

• Strengthening public participation in environmental decision-making. Under the Agreement, governments must guarantee opportunities for public participation in projects that will significantly impact the environment. They must involve the public early on in the decision-making process, and after a decision has been made, they must inform citizens of how their input shaped the final outcome. 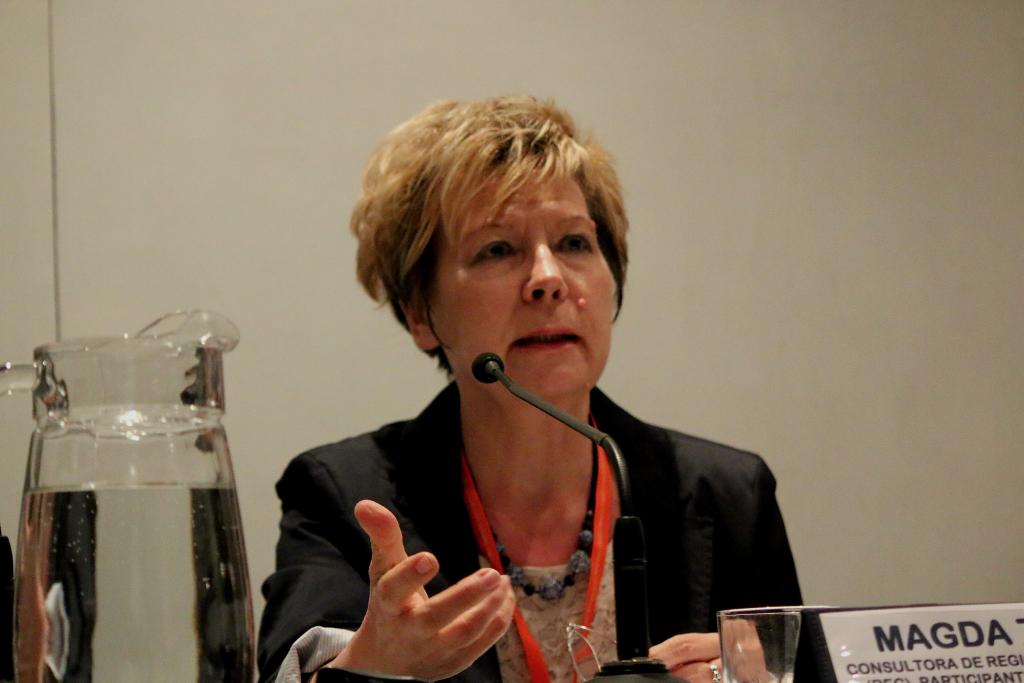 Magdi Toth Nagy, expert of REC and later of Guta Environmental Law Association, worked with the civil society actors in the negotiation of Escazú Convention

“The Escazú Agreement was adopted, after years of intensive negotiations with the involvement of Civil Society. 11 parties are required to ratify the agreement but with the recent ratification of Argentina and Mexico, there are already 12 Parties and 24 Signatories to this outstanding international legal instrument” shares Mrs. Magdi Toth Nagy, one of the most prominent experts on Aarhus Convention who worked on negotiating both the Aarhus and Escazú Agreement, supporting the civil society actors as an expert of REC and later of Guta Environmental Law Association. “The agreement will enter into force on the 90th day after the date of deposit of the 11th instrument of ratification, acceptance or approval, exactly on April 22nd, Earth Day! This in itself may be taken symbolic, as the agreement has great significance for the LAC region, being the first ever environmental agreement of this continent, and it also has global importance. Its ultimate goal is to guarantee the full and effective implementation of access rights in LAC, "contributing to the protection of the right of every person of present and future generations to live in a healthy environment and to sustainable development".

Toth Nagy further explains that this historic agreement is an instrument for environmental democracy, as the sister to the Aarhus Convention, includes similar provisions seeking to improve the access to information, public participation and access to justice rights for citizens, CSOs and for persons or groups in vulnerable situations. It is also the first international agreement guaranteeing in its Article 9, safe and enabling environment for human rights defenders, "for persons, groups and organizations that promote and defend human rights in environmental matters, so that they are able to act free from threat, restriction and insecurity." Its Parties are required to take appropriate effective and timely measures "to prevent, investigate and punish attacks, threats or intimidation that human rights defenders in environmental matters may suffer while exercising their rights" under the Agreement. With these provisions, Escazú sets a new standard for other regions to put in place similar guarantees for human rights defenders.

While ratification and entering into force of the Escazú Convention is undoubtedly a major achievement a long and difficult way lies ahead, warns Pavel Antonov, a Co-founder of the BlueLink civic communication network in Bulgaria. It is essential that governments should commit to effective implementation, rather than sidelining the convention’s provisions while hampering civic participation, as it has often happened with Aarhus in Eastern Europe. Civil society should be prepared to act as a watchdog and monitor governments’ progress, said Antonov, who is the former Editor of REC’s Green Horizon magazine.

Aarhus Convention which has inspired the process of negotiation and adoption of Escazú Convention and the experience of 20 years of implementation of the Aarhus Convention have been a driving force and example for the development of the new agreement.

Since the entry into force of the Aarhus Convention in 2001, BlueLink has been actively and systematically involved in its implementation, especially in the last years contributing to the work of the Task Force on Public Participation and Task Force on Access to Justice. In early 2021, BlueLink's legal and policy adviser Plamen Peev presented a statement on the practical implementation of air quality laws in selected EU countries. The Escazú Convention is an excellent example of the progress of international law in the field of environmental protection and its defenders but it also reminds us with its principles and provisions about the daily struggle of the activists to protect the environment for present and future generations, Peev comments.

More information on the Escazú Convention is available here.

Yet another important issue

BlueLink promotes shared European values: human dignity and rights, freedom, democracy, equality, rule of law, and environmental sustainability - by supporting trust-based civic networking and watchdog journalism. Help us do better! Learn more about the BlueLink's mission, vision, scope and activities. Share your stories, news and recommendations. Volunteer or join our international team. And make a donation to the BlueLink Foundation - this will keep us independent and firmly on course.