About 7 km from the Danube, Milkovitsa is home to some 2000-strong active and entrepreneurial community - one of the few in Bulgaria, which still preserved ancient Wallach language and customs. The village is  in the valley around the mouth of the Vit River, in the central part of the Danube’s bank of Bulgaria. It is located in the municipality of Gulyantsi, which together with the neighboring Nikopol and Belene, have been selected as socio-economical region with potential for tourist development. It will be analysed and fostered as part of EU-funded project DANube Urban Brand + Building Regional and Local Resilience through the Valorization of Danube's Cultural Heritage (DANUrB +). The project improves the quality of life and the demand for tourist services in the peripheral regions of the Danube River in order to stop the depopulation of the settlements in the region.

Milkovitsa is one of them. Here the celebration begins in the evening of December 24. Before setting a festive table, every family lits the house lights and the decorated Christmas tree. Then the host stirs the fire, calling: “As many sparks, so many chickens, calves, piglets and children in my home”, explains Elenora Atanasova, a member of a group of local women who keenly collect and preserve the cultural and historical memory in the village.

Walach indigenous Christmas-time festivities, known as La ajun, still persist in Mikkovitsa, said Desislava Mihailova, а dedicated collector of local traditions. According to local evidence, on the morning of December 24 old women baked small percels with ribbons, and handed them to children, who walked around the villlage in the afternoon, singing in Vlach:

In present times firewood is left to smolder all night. 5,7,9 or meals are placed on the table. After midnight with their songs the grown-up carol singers in Milkovitsa wish a good harvest and health to their families. The song reads in Bulgarian:

Get up now, mister!
For you have good guests, good guests, Carol singers!
We have started since last evening,
in those long, dark nights.
To look you up, who is where, and to bring you the good news - as many herbs in the ground, that much health in this house!

But Dessislaba collected information about some more peculiar indiginous Christmas traditions from only 25 years ago, from former carolers Valeri Kuzmanov, Milcho Dinchev, and Yordan Gergichanov.  According to them, the caroling group was divided into singers, musicians and brеzai - one of the historical names of the local Vlachs. The carolers wore traditional costumes, worn with cassacs, with kalpak hats on their heads, decorated with boxwood and custom jewelry. The staff of each of them was decorated with basil and boxwood, tied with red woolen thread.

The brezai were an integral part of the Christmas party,  Desislava explains. They drive a cart with men disguised as a bride and a groom, along with Mosh Krachun - the Valach equivalent of Santa, dressed in an upside-down cloak. The “bride” wore large scissors - chopki, made of wood, which “she” tried to make as loud noise as possible. Bells were attached to the cart to make even more noise. Two carolers escorted the procession: one dressed up as a priest in the front, and one - as a policeman, or a Turk (in reference to Ottoman memories). In this way, it was believed that the brezai chased away evil. 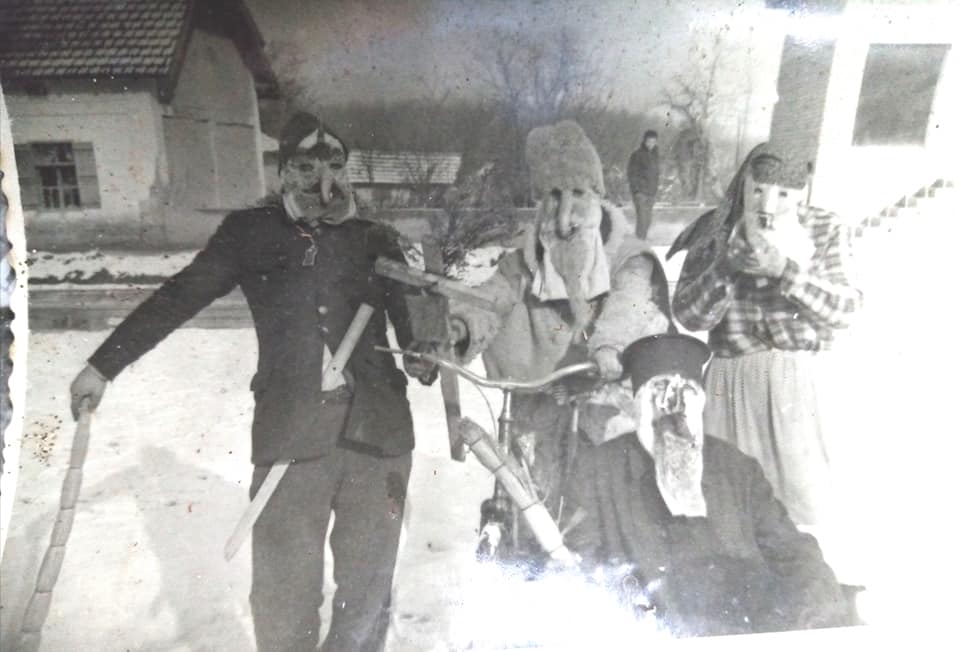 Upon arrival at each home, the carolers sang to the accompaniment of the musicians. They used to perform carols for each member of the family, hitting their sticks on the ground with the chorus of each song. This was followed by a performance by the brezai, with the participation of family members. The owner of the house donated Mosh Krachun with a ritual cake. A girl or the house wife strung pretzels on Christmas sticks. Each family donated the carolers according to their abilities, trying to make his gift as rich and beautiful as they expected the New year to be, Desislava reveals.

Nowadays hosts usually present the carolers with a bread, money, wine and the custom itself ends with a feast. In Milkovitsa it has lately taken place in the home of Krassimir Goychev, a leading farmer in the village. This year, however, due to restrictions against COVID, everyone will celebrate Christmas at home, says Eleonora, who often organizes local celebrations.

Eleonora Atanasova is also an avid photographer. To her, the area around Milkovitsa is a treasure trove of themes, colors and images. Although economically underdeveloped, it offers rich natural, cultural and historical features. One of its most intriguing features is the mixture between Bulgarian and Wallachian traditions and customs, due to the presence of one of the best preserved Wallachian communities in Bulgaria here. 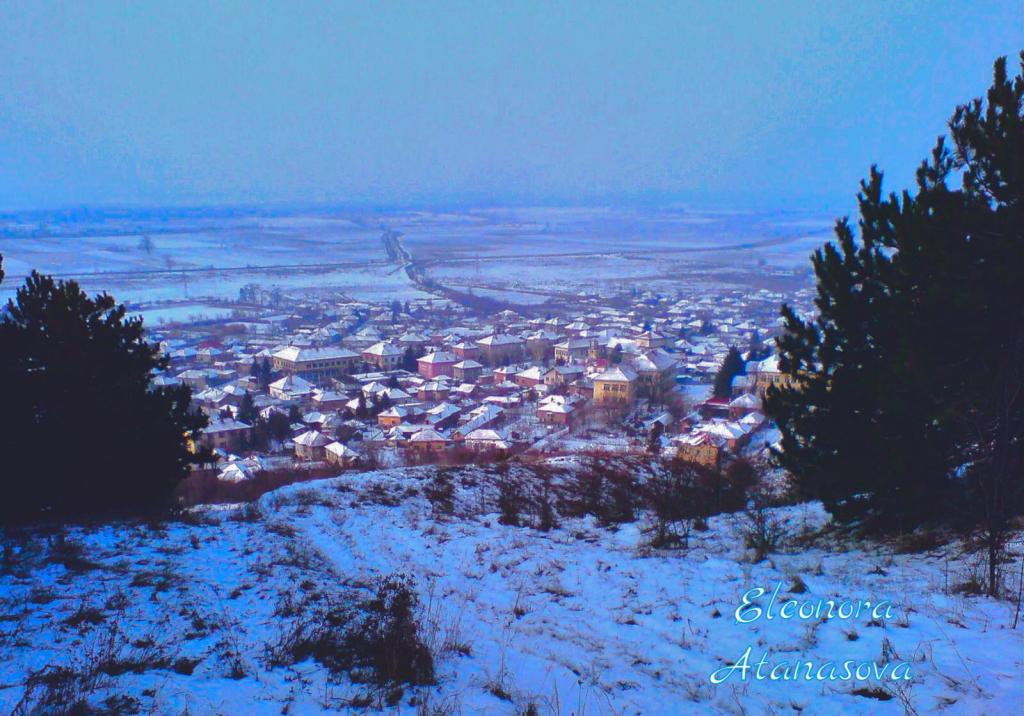 Winter panorama to Milkovitsa and the Danube. Photo: E. Atanasova

Milkovitsa is nestled among hills covered with forests and picturesque ravines, at the very end of the former flood plain of the Vit. In Bulgarian, the name of the river is semantically related to the term ‘twisted’, which corresponds to the historical state of the river. Until the 1950s, it meandered freely and furrowed the area with surrealistically intertwined old riverbeds, preserving a rich natural diversity. They attract fishermen, hunters and tourists.
But the name Vit is also similar to the Roman name of the river Utus. The ancient Thracians called it Artanya. Nearby lie the well preserved remains of the ancient Roman city of Ulpia Escus.

All these features are a great basis for sustainable rural and nature tourism in the area, which is increasingly souht after in Bulgaria and neighboring Romania. It is also crossed by the Danube European cycling route 6, which is now increasingly used by cyclists from all over Europe.

This is why a nucleus of entrepreneurial people in Milkovitsa are looking for ways to offer tourists their own products and services. They have been organizing and implementing voluntary initiatives in this direction for years, successfully mobilizing the local community for participation, including financially. The DANURB + project will help them take the next step by coordinating and structuring their efforts for an effective business result. 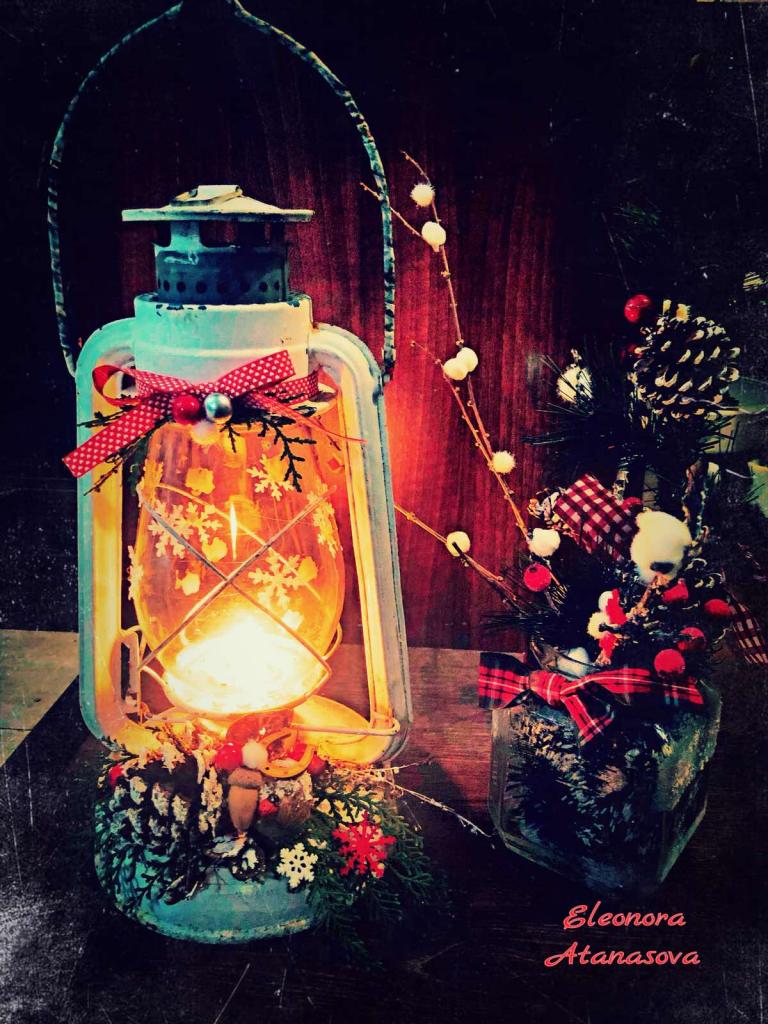 Christmas decoration in the house of Eleonora Atanasova Nukova in the village of Milkovitsa. Photo: personal archive

More about the Danube from BlueLink

The text was published as part of the project DANube Urban Brand + Building Regional and Local Resilience through the Valorization of Danube's Cultural Heritage (DANUrB +). The project is co-financed by the European Union through the European Regional Development Fund (ERDF) and the Instrument for Pre-Accession Assistance (IPA), as well as the national budget of Republic of Bulgaria through the budget of the Ministry of Regional Development and Public Works. The content is sole responsibility of the BlueLink Foundation.